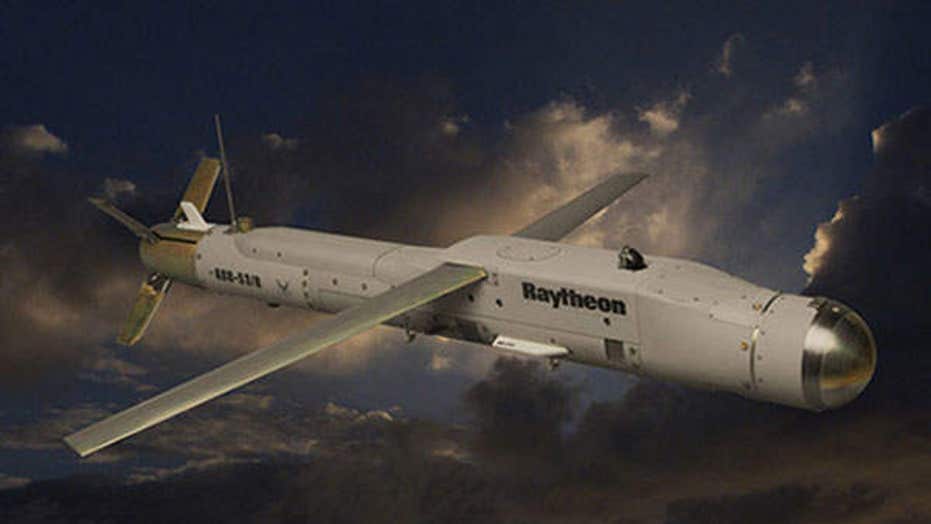 The Air Force is preparing to arm its F-35 with a new, all-weather course-correcting air-dropped precision bomb able to destroy moving targets from distances as far as 40 miles. It uses a data link and multi-mode targeting seeker to follow targets through fog, rain or dust from great distances.

The service recently completed a "captive carry" test of the bomb's technologies on an F-35 to prepare for full integration into the stealth fighter.

The "Stormbreaker" weapon, slated to operate on the F-35 by 2023, was previously known as the Small Diameter Bomb II. It is expected to inspire new Air Force tactical and strategic adjustments by virtue of introducing previously impossible attack possibilities.

Some of the innovations built into the weapon are naturally designed to help the Air Force stay in front of major power rivals, many of whom have spent years engineering technologies to "counter" U.S. weapons. Russia and China, for instance, are known to have studied U.S. weapons systems for years with the specific purpose of finding ways to destroy, disable and counter them in war. It is part of a well-known cycle of great power military competition, wherein each power works vigorously to stay in front of potential rivals through various innovations, upgrades and new technical applications.

Air Force and industry efforts to stay in front of great power competitors with upgraded weapons and advanced technologies are often intended to “counter” enemy “countermeasures.” Weapons developers, who engineer radar systems, sensors and weapons such as the AIM-9X, Stormbreaker and AIM-120D, explain that major rival adversaries have now spent years studying U.S. weapons with the aim of building technologies to outmatch them.

This scenario, therefore, requires a calculated and highly advanced response, often resulting in weapons upgrades. Raytheon's technical adjustments and modernization initiatives with the Stormbreaker air-dropped weapon, for instance, incorporate a few upgrades and “countermeasure” improvements designed to outmatch enemy attacks. The Stormbreaker, slated to arm Air Force F-35s by 2023, relies upon all-weather stand-off precision-strike capability and a “tri-mode” seeker to track and destroy moving targets at ranges up to 40-miles.

A data link built into the Stormbreaker, Raytheon developers say, enables the weapon to receive “in-flight” target updates, change course in response to new intelligence and exchange data both to and from the host aircraft. The Stormbreaker can rely upon all-weather millimeter wave sensing, imaging infrared guidance or semi-active laser targeting, depending upon the requirements of a given attack mission.

CHINA WILL DOUBLE ITS ARSENAL OF NUCLEAR WARHEADS, REPORT SAYS

Raytheon and the Air Force recently completed a successful “captive carry” test of the seeker on an F-35 designed to integrate the new weapon onto the fifth-generation fighter. Not only will Stormbreaker allow for greater stand-off ranges and attacks in adverse weather conditions which might otherwise obscure or complicate targeting, but it is also engineered with the data-exchanges necessary to support the Air Force’s Air Dominance concept based on sharing information in combat to increase lethality.

In these scenarios, millimeter wave radar would bring an expanded targeting envelope to air-attack possibilities. Millimeter wave could enable the delivery of precision effects in the kinds of adverse weather conditions known to complicate other sensors such as often used laser-guidance, infrared detection or electro-optical cameras.  Laser signals, while extremely precise and used regularly to great effect to designate enemy targets, can at times suffer what’s called “beam attenuation” due to smoke, fog or other weather impediments.

An interesting essay – "Through Fog High Resolution Imaging Using Millimeter Wave Radar” from the University of Illinois at Urbana-Champaign – on this topic states that  “cameras or LiDARs suffer in low visibility conditions and bad weather. Cameras also suffer at night in low light conditions… Millimeter wave radars offer more favorable characteristics due to their ability to work at night and penetrate through fog, snow and dust.” Thermal imaging can also decrease in effectiveness due to dense fog, the essay adds.

As part of yet another effort to prevent enemy countermeasures, Raytheon’s upgraded AIM-9X uses advanced “IR spectrum seekers” to counter enemy efforts to block, confuse or thwart IR targeting. Spectrum seekers can enable frequency changes or "hopping" to make fast adjustments if one frequency is jammed.

In effect, weapons upgrades are designed to “counter” an enemy's “counter,” thereby increasing the prospect of a successful strike. The AIM-9X is also engineered to align with the Air Force strategy with its “off-boresight” targeting technology, an integrated sensor and thrust-vector system that enables the pilot to destroy otherwise “out-of-view” enemy targets behind or beside the aircraft. By drawing upon an advanced sensing network that includes 360-degree cameras and a helmet-mounted cueing system, pilots can find and attack enemy fighters approaching from behind, without having to reposition into a more linear, or straight-on line-of-sight attack posture.

Kris Osborn is the managing editor of Warrior Maven and The Defense Editor of The National Interest.